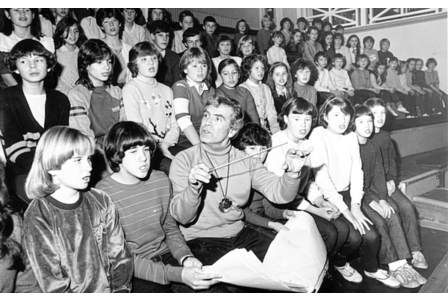 Robert Mandell (born August 22, 1929) is an international conductor. While American, he is noted in the United Kingdom for his popular family concerts, young people's concerts, and stage musicals. Between 1955 and 1967, Mandell was executive music director of the North Shore Music Theatre in Beverly, Massachusetts. Between 1961 and 1968, he recorded over 50 LP discs in London for Readers Digest Records under a variety of pseudonyms, including Eric Hammerstein, Johnny Gibbs, Ray Thomas, Juan Ramirez, Pablo Mendez, Dick Mahi, The Button-Down Brass, The Romantic Saxophones and Strings, and The Collegians. In 1968 Mandell took up residency with his family in England. He concentrated his career initially in musical theater and then on bringing popular classical concerts to a new audience through his "Concerts for the Family" series.
AVAILABLE RECORDINGS  WIKIPEDIA VIDEO:
Email ThisBlogThis!Share to TwitterShare to FacebookShare to Pinterest
Newer Post Older Post Home