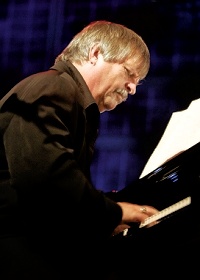 Born in Aberbargoed in the south Wales valleys, Eales began his musical education at the age of eight, in the late 1950s. His father Horace, pianist in a well-known local dance band, taught him to play the 12-bar blues. He was also introduced to piano masters Erroll Garner, George Shearing and Oscar Peterson, as well as Bud Powell, Charlie Parker and Dizzy Gillespie. Early in his career he cruised the world on a Greek liner. During this period he spent a great amount of time in New Orleans where he played with many American jazzmen such as Buddy Tate, Jimmy McPartland, Earl Warren and Major Holley. He then moved to London, where he joined Joe Loss's band. The following year he became the pianist in the BBC Big Band, where he remained for over four years. For the next 15 years Eales worked with a vast array of conductors, composers and singers including Henry Mancini, Lalo Schifrin, Jerry Goldsmith, Andrew Lloyd Webber, Rosemary Clooney, Adelaide Hall, Tammy Wynette, Shirley Bassey, Andy Williams, Kiri Te Kanawa and José Carreras. WIKIPEDIA | Official Website | AVAILABLE RECORDINGS

VIDEO: Geoff Eales is regarded as one of Europe's most inspirational jazz pianists and composers. Though he has been pro-active in a vast variety of musical situations throughout his long and distinguished career - accompanying pop stars, country singers, opera divas, blues artists and funk legends as well as working extensively on TV shows, commercials and film soundtracks - it is within the realm of jazz and improvised music and as a soloist in his own right that the full extent of Geoff's musical personality is revealed.