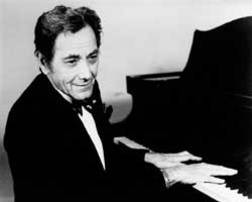 He began his career by playing trumpet and piano with New York City dance bands. He joined Bunny Berigan's band in 1935, then left to join Muggsy Spanier's Ragtime Band in 1939. From the late 1930s through to the late 1940s he also worked with Eddie Condon on records, radio and TV. After service in WWII he worked with Louis Armstrong and Benny Goodman.
He might be best known for co-writing "Oh! Look at Me Now", with John DeVries, when he worked in Tommy Dorsey's band. That song would become Frank Sinatra's first hit. In his 60s Bing Crosby ended Bushkin's semi-retirement with an offer for them to tour together.
Bushkin died in 2004.