Annunzio Paolo Mantovani (Italian pronunciation: [anˈnuntsi̯o ˈpaolo mantoˈvaːni]) (November 15, 1905 – March 29, 1980) known as Mantovani, was an Anglo-Italian conductor and light orchestra-styled entertainer with a cascading strings musical signature. The book British Hit Singles & Albums states that he was "Britain's most successful album act before The Beatles ... the first act to sell over one million stereo albums and had six albums simultaneously in the US Top 30 in 1959". 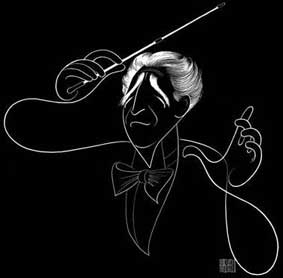 The cascading strings technique developed by Ronald Binge became Mantovani's hallmark in such hits arranged by Binge as "Charmaine". Binge developed this technique to replicate the echo experienced in venues such as cathedrals and he achieved this goal through arranging skill alone. Author Joseph Lanza describes Mantovani's string arrangements as the most "rich and mellifluous" of the emerging light music style during the early 1950s. He stated that Mantovani was a leader in the use of new studio technologies to "create sound tapestries with innumerable strings", and that "the sustained hum of Mantovani's reverberated violins produced a sonic vaporizer foreshadowing the synthesizer harmonics of space music.