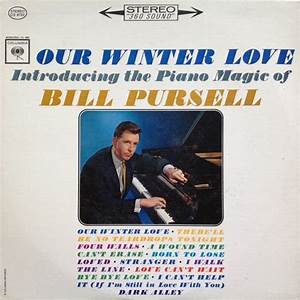 William Whitney Pursell (June 9, 1926 – September 3, 2020) was an American composer and onetime session pianist. He had a brief but successful career as a pop musician before continuing on as a session player. He is best known for the top ten hit "Our Winter Love." In 1962 he signed with Columbia Records, and the hit single "Our Winter Love" was released that year, which hit No. 9 on the Billboard Hot 100, in addition to hitting No. 4 on the Easy Listening chart and No. 20 on the Hot R and B Singles chart. A full-length album entitled Our Winter Love was released the following year. The album reached #15 on the Billboard 200 on the strength of the popularity of the title track. The arrangements for the album were made by Bill Justis and Pursell, and the orchestra was conducted by Grady Mart WIKIPEDIA | Available Recordings