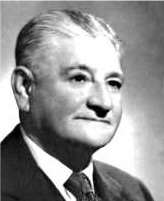 While I Live is a 1947 British drama film, directed by John Harlow. While I Live is best remembered for its musical theme "The Dream of Olwen" composed by Charles Williams,[photo,left] reprised at intervals throughout the film, which became hugely popular in its time and is still regularly performed. The film itself became widely known as The Dream of Olwen.

Charles Williams (8 May 1893 – 7 September 1978) was a British composer and conductor, contributing music to over 50 films. While his career ran from 1934 through 1968, much of his work came to the big screen as stock music and was therefore uncredited. He began his career as a freelance violinist in theatres, cinemas and symphony orchestras and later studied composition with Norman O'Neill at the Royal Academy of Music. In 1933, he went to Gaumont British Films as composer and stayed there until 1939. He composed for many British films and radio shows and after the end of World War II, he became the conductor of the new Queen's Hall Light Orchestra. Later, he formed his own Concert Orchestra. He died in Findon Valley, Worthing, West Sussex, aged 85. WIKIPEDIA