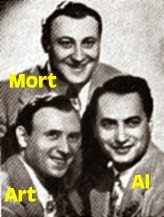 He was also a member of a pop trio called the Three Suns, and is considered one of the major forces behind the evolution of the 1950s music into the early 1960s pop/rock music.
WIKIPEDIA   |   AVAILABLE RECORDINGS
He continued solo, recording three albums: Escapade in Sound, Lights and Shadows and Dancing with the Blues, the last arranged by Charles Albertine. Some releases were under the name Al Nevins and Orchestra. 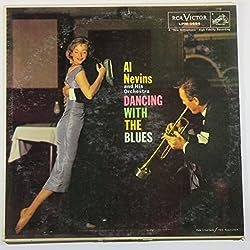 VIDEO: Beyond The Blue Horizon soundie, performed by The Three Suns, an American instrumental and exotica group popular in the 1940s and 1950s. The group was formed in 1939 by brothers Al Nevins (guitar) and Morty Nevins (accordion) and their cousin, radio and vaudeville veteran Artie Dunn (vocals, electronic organ). They were signed in New York City to appear in nine short musical films for the Soundies movie jukeboxes.