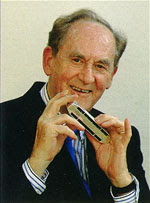 Thomas (Tommy) Rundle Reilly (August 21, 1919 - September 25, 2000) was a Canadian classical harmonica player. In 1992 he received an MBE (Member of the Order of the British Empire) from Queen Elizabeth for his services to music.
Reilly developed and invented much of the playing technique which is common today. He wrote a handbook Play like the Stars, about playing classical style on the chromatic harmonica.
In 1967 Reilly initiated the development of the first Hohner silver harmonica, which became the de-facto standard concert instrument for many years and which Hohner has made with few adjustments ever since. He died aged 81 in Frensham, Surrey.
Search Amazon.com for TOMMY REILLY harmonica