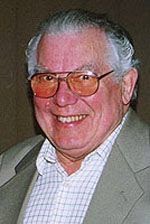 He was most musically active in the 1960s and 1970s. Greenslade was born in Northfleet, Kent. In the 1950s, he was pianist and arranger with the Oscar Rabin Band. He has arranged for Jack Jones, Chris Farlowe, Serge Gainsbourg, Genesis, Cat Stevens, Diana Ross, Dusty Springfield, The Bachelors, and Kinderjazz. For Shirley Bassey, he arranged "Goldfinger" and "Send in the Clowns". He has conducted orchestras in the Hollywood Bowl and Carnegie Hall, and was Bassey's musical director. With Andrew Oldham he wrote "Headlines", the B-side of "Ride On Baby" (IM 038), by Chris Farlowe, which was released in 1966. Greenslade also conducted some easy listening recordings which can be heard regularly on the BEAUTIFILinstrumentals.com Internet station. He conducted the orchestra for Rod McKuen's first television special, which aired on NBC in May 1969. He also arranged Ireland's 1973 Eurovision Song Contest entry, Do I Dream, sung by Maxi_(singer). Greenslade died, aged 80, in Sydney, Australia.
WIKIPEDIA   |   AVAILABLE RECORDINGS