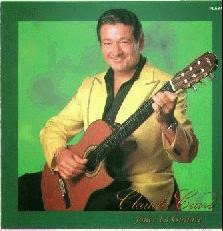 French guitarist Claude Ciari has the rare distinction of being the first Caucasian to run for a seat in the upper house of the government of Japan. While he was not elected, he used the opportunity to publicly challenge what he felt was a stupid law for foreigners, a stance that only furthered his popularity in Japan. Ciari was born in Nice on the French Riviera in 1944. He started to play guitar when he was 11, and by 16 he was proficient enough to join a rock group, Les Champions, featuring himself on lead guitar along with Jean-Claude Chane (singer), Alain Santamaria (guitar), Daniel Kaufman (bass guitar), and Willy Lewis (drums). Les Champions, with a sound closer to the Jordanaires than the more popular instrumental groups of the era, recorded several singles, and even toured France with Gene Vincent in October 1962. Les Champions were not very original, and Ciari became frustrated when the band decided to become the support band for French singer Danyel Gerard.