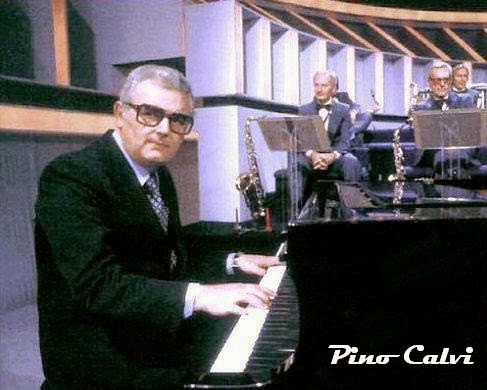 Calvi composed many Italian songs and soundtracks for movies and dramas. A prolific composer, he wrote among many Accarezzame, one of the best known songs of Neapolitan music, played by artists such as Roberto Murolo, Ornella Vanoni, Peppino Di Capri, Achille Togliani, Teddy Reno, Fred Bongusto, Gigliola Cinquetti, Paolo Fresu. Son of art, although his father was a musician, as a child learns the rudiments of music and then a teenager, he joined the orchestra dance of the father. After graduating from a land surveyor, he graduated from the outer to the Conservatory and later approaches to jazz, playing the piano along with musicians such as Giorgio Azzolini bassist, guitarist and drummer Bruno De Filippi Gilberto Cuppini. At the end of the fifties then becomes arranger for Columbia and His Master's Voice, made ​​many recordings of light music for singers of the two labels. In 1957 he took part with a dream of crystal in the Sanremo Festival: the song, with the words written by Alberto Testa, is presented by Carla Boni and Jula De Palma; in 1962 is back with the umbrella, sung by Johnny Dorelli. The festival also conducts the orchestra in 1963 (the year in which it is again in the race with did not know, sung by Milva and Gianni Lacommare), in 1964 and 1966 In 1968 he made the Romantic album n ° 1, which returns with new arrangements of some famous songs of the period (such as Sunny or Lara's theme from the soundtrack of the film Doctor Zhivago), where Azzolini accompany him on bass, De Filippi on guitar Cuomo and Henry on drums; is the first in a series of albums recorded for various labels but with the same title and numbered consecutively. Become famous among the general public in the second half of the sixties and seventies due to its participation in certain programs of RAI, especially in the historic Without network, broadcast from studios in Naples, where he was conductor polite and affable, and two historic in Sunday editions presented by Conrad in 1978 and 1979; I also participated in and the Epiphany with Raimondo Vianello and Sandra Mondaini, transmission combined with the Lottery Italy, where he launched the ending theme performed on the piano "Alexandra", dedicated to the Mondaini; for the actress also wrote a text by Alberto Testa, the song "Sbirulino", the name of one of the characters played by Mondaini most loved by the public. He then returned with Corrado to conduct the orchestra program Grand Canal. Among his biggest hits, as well as Accarezzame, Monte Carlo (with lyrics by Leo Chiosso) swinging song sung by Johnny Dorelli that is part of the soundtrack of the film Crimen (1960) by Mario Camerini (starring Alberto Sordi, Vittorio Gassman, Nino Manfredi, Franca Valeri, Silvana Mangano). He has composed soundtracks for numerous dramas of RAI including Lt. Sheridan (1971), Ubu Roi (1971), Joe Petrosino (1972), Malombra (1974), The Dutch died (1974), Diagnosis (1975), Forget Lisa (1976)    AVAILABLE RECORDINGS