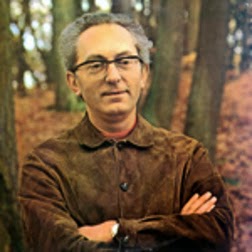 "Love is Blue", a song Vicky Leandros performed at the Eurovision Song Contest 1967 on behalf of Luxembourg, also recorded by Claudine Longet, became a popular world-wide hit. In these recordings, Popp does not sacrifice the sophistication of his 1950s orchestrations, but rather than animate the songs, he seems to set the tone, the mood, painting a colorful picture. Sometimes there are silky, smooth strings; often there is harpsichord and oboe and flute; elsewhere adventurous brassy fanfares; occasionally an ethereal soprano chorus; always some magical musical final touch, like the faint, quavering harmonica in "Manchester et Liverpool". Marie Laforêt's voice fit perfectly in André Popp's 1960s soundscapes and he created more of them for her than for her contemporaries. Popp died at his apartment in the Paris suburb of Puteaux on 10 May 2014.  AVAILABLE RECORDINGS
Email ThisBlogThis!Share to TwitterShare to FacebookShare to Pinterest
Newer Post Older Post Home