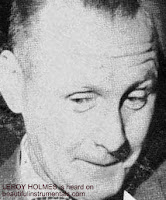 Alvin Holmes from Pittsburgh, Pennsylvania died on July 27, 1986, in Los Angeles, California. was an American songwriter, composer, arranger and conductor.
Holmes studied music at Northwestern University in Evanston, Illinois and the Juilliard School in New York, before working with a number of bandleaders during the 1930s and early 40s. These included Ernst Toch, Vincent Lopez, and Harry James
After serving as a lieutenant in the US Navy during the Second World War, he moved to Hollywood, where he was hired by MGM Music Studios as a house arranger and conductor, before later moving to United Artists. During his time with MGM, he backed numerous vocalists, including Judy Garland, and in 1954 made what is possibly his best known recording, a version of the theme to the film The High and the Mighty. The song is known for its distinctive accompanying whistling, which was provided by Fred Lowery. Holmes provided the orchestration for Tommy Edwards epic 1958 hit "It's All In The Game", and tried rock and R&B with his backing to the Impalas "Sorry (I Ran All The Way Home)". Holmes also wrote the theme song to the television series International Detective.
He moved to United Artists Records in the early 1960s, where he contributed to many compilations of movie themes, released albums under his own name and backed a succession of singers, notably Connie Francis, Gloria Lynne, Shirley Bassey and Puerto Rican singers like Tito Rodríguez and Chucho Avellanet. In addition, he produced albums for a number of United Artists acts, including the Briarwood Singers. He also worked on the music for the 1977 film The Chicken Chronicles (see 1977 in film). (Wikipedia)
Email ThisBlogThis!Share to TwitterShare to FacebookShare to Pinterest
Newer Post Older Post Home