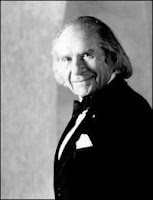 Frederick Fennell (July 2, 1914 in Cleveland, Ohio – December 7, 2004 in Siesta Key, Florida) was an internationally recognized conductor, and one of the primary figures in promoting the wind ensemble as a performing group. He was also influential as a band pedagogue, and greatly affected the field of music education in the USA and abroad. In Fennell's The New York Times obituary, colleague Jerry F. Junkin was quoted, saying "He was arguably the most famous band conductor since John Philip Sousa." Fennell chose percussion as his primary instrument at the age of seven, as drummer in the fife-and-drum corps at the family's encampment called Camp Zeke. He owned his first drum set at age ten. In the John Adams High School Orchestra, Fennell performed as the kettledrummer and served as the band's drum major. His studies at the Interlochen Arts Camp (then the National Music Camp) included being chosen by famed bandmaster Albert Austin Harding as the bass drummer in the National High School Band in 1931. This band was conducted by John Philip Sousa on July 26, the program including the premiere of Sousa's Northern Pines march. Fennell himself conducted at Interlochen at the age of seventeen.