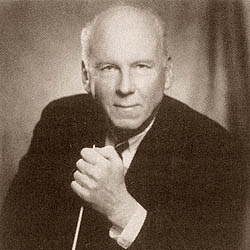 Leroy Anderson (June 29, 1908 – May 18, 1975) was an American composer of short, light concert pieces, many of which were introduced by the Boston Pops Orchestra under the direction of Arthur Fiedler. John Williams described him as "one of the great American masters of light orchestral music." Born in Cambridge, Massachusetts to Swedish parents, Anderson was given his first piano lessons by his mother, who was a church organist. He continued studying piano at the New England Conservatory of Music. In 1925 Anderson entered Harvard University, where he studied theory with Walter Spalding, counterpoint with Edward Ballantine, harmony with George Enescu, composition with Walter Piston and double bass with Gaston Dufresne.[citation needed] He also studied organ with Henry Gideon. He graduated with a Bachelor of Arts degree in 1929 and Master of Arts in 1930.