John Gregory, has died aged 95, was an award-winning musician, composer and arranger. 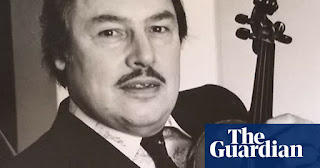 Johnny Gregory wrote and arranged music for 27 films, including Serena (1962), The Sicilians (1964), Electric Dreams (1984) and Revolution (1985). He scored more than 500 compositions and made more than 2,000 records, spanning covers for the Embassy label to light music, easy listening and Latin American. You can hear 52 selections by The John Gregory Orchestra on our streaming playlist. Under the names Chaquito and Nino Rico, he launched a successful series of big band Latin American style albums. Two of these, This Chaquito (1968) and Thriller Themes (1972) entered the UK album charts. He collaborated with vocalists including Cleo Laine and Nana Mouskouri. Then, in 1960, he began to make his own records. The Cascading Strings were part of the Philips record label’s easy listening albums. 101 Strings Orchestra and Living Strings showcased his impressive talent for beautiful arrangements using strings. More unusual was Melodies of Japan (1963), a unique and magical reworking of the traditional folk music of the far east. Sun 31 May 2020...GUARDIAN