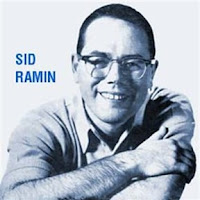 Born in 1919, Sid Ramin was the son of Ezra Ramin, a window trimmer, and Beatrice D. (Salamoff) Ramin. He orchestrated many television, film, and theatrical productions. He also composed the theme and lyrics for "Smile, You're on Candid Camera" of the hidden camera television program Candid Camera in the 1960s. In his early years, Ramin frequently collaborated with arranger Robert Ginzler, most notably on Gypsy. With Leonard Bernstein and Irwin Kostal, he co-orchestrated the music for West Side Story. He was the composer of the famous hit "Music to Watch Girls By" first released as an instrumental single in 1967 by The Bob Crewe Generation. Ramin married Gloria Breit, a singer and model, on January 9, 1949. They had one child, son Ronald "Ron" Ramin, who also works as a composer. He turned 100 on January 2019 and died on July 1 of the same year.
WIKIPEDIA   |   AVAILABLE RECORDINGS