Anthony "Tony" Acquaviva May 10, 1925 - September 27, 1986, also known professionally as Acquaviva, was an American composer, conductor and string instrumentalist, and the founder of the New York Pops Symphony Orchestra. 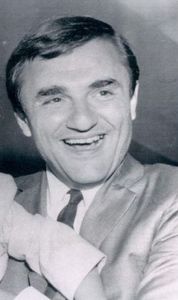 Acquaviva was a graduate of the United States Military Academy and served in the Army's orchestral division from 1944 to 1948. As a struggling young musician in New York, he roomed with singer Guy Mitchell, sleeping on the floor for lack of furniture and once admitted to the press that the refrigerator there contained only one jar of mustard.
AVAILABLE RECORDINGS
WIKIPEDIA | Joni James  |  JONI JAMES RECORDINGS 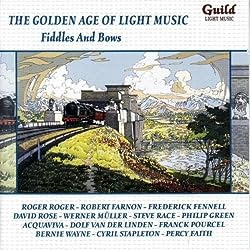 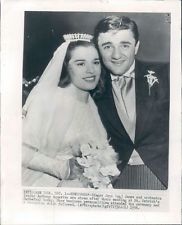 He married Joni James in 1956 at St. Patrick's Cathedral in New York City and served as her manager and conductor. He recorded for MGM Records (notably the LP album "Music of Acquaviva", MGM E3226), and his works include "The Cavalier's Ball" and "My Love, My Love", the latter of which was recorded by his wife and reached Gold Record status at its release. Acquaviva later fell into bad health, and Joni James retired from performing to care for him (and their two children, adopted from Italy) for the last 18 years of his life. In recent years several authors have confused Tony Acquaviva with his younger brother Nick, who is the cowriter of "My Love, My Love" and numerous other Joni James hits. Tony Acquaviva did not compose songs which Joni James recorded, however, uncredited, he reportedly according to Joni James did write the bridge for the English version of the standard "That's All," a song he also successfully recorded.
Email ThisBlogThis!Share to TwitterShare to FacebookShare to Pinterest
Newer Post Older Post Home