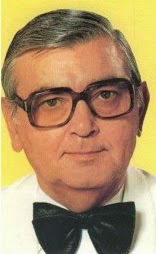 Eric Bachmann started his career as an arranger, working for German, Swiss and Austrian artists during the 1950s and 60s. Later he formed his own 18 man big band. To perform is own arrangements in a more sophisticated style he enlarged his orchestra to 64 members. Bachmann's arrangements usually include full strings, brass and woodwinds This enabled all of his musicians to participate in his recordings. One of the few European bands that managed to combine the typical "strict tempo" European ballroom style with the more rhythmic and melodic American dance band sound such as Bert Kaempfert, Werner Muller and others. Several of Bachmann's larger orchestral selections have been added to the BEAUTIFULinstrumentals.com Internet stream playlist. AVAILABLE RECORDINGS