Mitchell Ayres plays romantic ballads for you over BEAUTIFULinstrumentals.com

Several old standards have been added to our playlist by the Mitchell Ayres orchestra.
Born Mitchell Agress on December 24, 1909 in Milwaukee, he got his start playing violin with New York City's Roxy Theater Orchestra, then the St. Louis Symphony Orchestra, before turning to popular music with the Big Bands of Jimmy Carr, Abe Lyman and Little Jack Little. Around 1937, when he and some other band members in Little's aggregation decided to strike out on their own, they took the unique approach of forming their own band as more or less a mini-company, complete with shares, and then choosing their leader by election. He is best known for his many years of work with Perry Como on radio, records, and television and as the musical conductor for The Hollywood Palace. Ayres began conducting for various singers including The Andrews Sisters and Frank Sinatra during World War II. Tragically, Mitchell Ayres was struck and killed by a car in his 60th year on September 5, 1969 while crossing a street in Las Vegas. At the time, he had just been hired on as conductor at the recently-opened Landmark Hotel for a show by Connie Francis.

This classic 1958 audiophile recording features the orchestra playing a selection of timeless romantic ballads including "The Nearness Of You," "How Deep Is The Ocean," There's A Small Hotel" and other greats. Featured on the album is long time Ayres musician Harry Terrill on saxophone. All selections newly remastered can
be heard on the BEAUTIFULinstrumentals station. 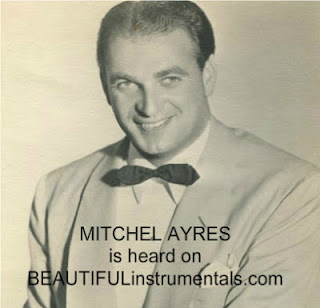