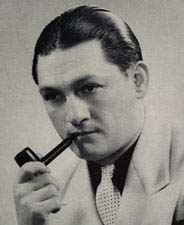 Victor Young (August 8, 1900 – November 10, 1956) was an American composer, arranger, violinist and conductor. He was born in Chicago. Young was born in Chicago on 8 August 1900 into a very musical family, his father being a member of one Joseph Sheehan’s touring Opera company. The young Victor began playing violin at the age of six, and was sent over to Poland when he was ten to stay with his grandfather and study at Warsaw Imperial Conservatory, achieving the Diploma Of Merit.He studied the piano with Isidor Philipp of the Paris Conservatory.While still a teenager he embarked on a career as a concert violinist with the Warsaw Philharmonic under Julius Wertheim before returning to Chicago in 1920 to join the orchestra at Central Park Casino. He then went to Los Angeles to join his Polish fiancée, finding employment first as a fiddler in impresario Sid Grauman's Million Dollar Theatre Orchestra then going on to be appointed concert-master for Paramount-Publix Theatres. In the mid-1930s he moved to Hollywood where he concentrated on films, recordings of light music and providing backing for popular singers, including Bing Crosby.His composer credits include "When I Fall in Love," "Blue Star (The 'Medic' Theme)," "Moonlight Serenade (Summer Love)" from the motion picture The Star (1952), "Sweet Sue," "Can't We Talk It Over," "Street of Dreams," "Love Letters," "Around the World," "My Foolish Heart," "Golden Earrings," "Stella by Starlight", and "I Don't Stand a Ghost of a Chance with You."

"Stella by Starlight" (performed by Victor Young orchestra) is a recurring theme in movie The Uninvited.

At a focal point of the film, the main character, Rick (Ray Milland) tells Stella (Gail Russell) that he is playing a serenade, "To Stella by Starlight