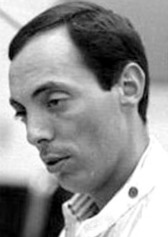 Snuff Garrett (born Thomas Lesslie Garrett on July 5, 1939, in Dallas, Texas) is a retired American record producer whose most famous work was during the 1960s and 1970s. His nickname is a play on Garrett's Snuff, a brand of smokeless tobacco. He was a staff producer at Liberty Records during the 1960s, and was responsible for hiring Phil Spector as a producer for Liberty. Later he had his own record label, Snuff Garrett Records. He produced a series of LPs for Liberty under the name of "The 50 Guitars of Tommy Garrett," one of the least adventurous and most easy-listening guitar groups, usually arranged by Ernie Wilkins and with Tommy Tedesco

as lead guitar. Garrett worked regularly with The Ron Hicklin Singers on many projects, and was responsible for the new sound of The Ray Conniff Singers

in the early 1970s (which employed the Hicklin Singers), producing two albums with Conniff. In 1976, Garrett set up a sublabel of Casablanca Records called Casablanca West. The label released just one album and two singles before folding. In 1978, Garrett produced the country-oriented soundtrack of Clint Eastwood's Every Which Way but Loose, which appeared on Garrett's latter-day label, Viva Records.
Garrett retired to Arizona during the 1980s. Among his other interests are American Western art, and he shares his collection with the public through prints. --Wikipedia