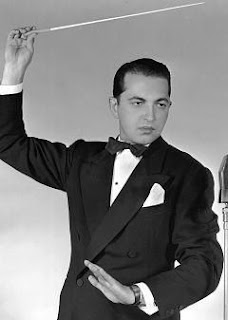 Wally Antuck, a Buddy Clark collector who must have devoted years to this project, did the very difficult work of making digital copies of these shows that originated from 16” transcription discs. They reuse a lot of thematic material and breakers (and applause for that matter) so this was, at least to my ears, a live show rather it was produced for the Armed Forces Radio Network, and the broadcast dates I have for these two programs are the first known “broadcasts.” I may be able to put most of them up for listening to music from the 1940’s – fast paced to be sure, and you’ll hear tunes that Percy Faith re-arranged several times through the 60’s for the most part.

Vocalist Buddy Clark does most of the announcing and singing duties; he died in 1959, I believe, and Marilyn Leonard (Percy Faith’s daughter) had told me that while her father and Buddy Clark made many of these recordings for wartime and after, they never recorded a single “side” together commercially. The shows start with the “Carnation Contented Hour” theme. I should be able to include most of these shows over time.