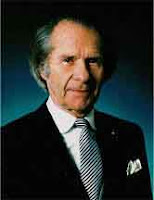 Frederick Fennell (July 2, 1914 in Cleveland, Ohio – December 7, 2004 in Siesta Key, Florida) was an internationally recognized conductor, and one of the primary figures in promoting the wind ensemble as a performing group. He was also influential as a band pedagogue, and greatly affected the field of music education in the USA and abroad. In Fennell's The New York Times obituary, colleague Jerry F. Junkin was quoted, saying "He was arguably the most famous band conductor since John Philip Sousa. Fennell recorded over 300 compositions on 29 albums for Mercury Records. For Mercury, Fennell recorded with the Eastman-Rochester "Pops", London "Pops" (actually the London Symphony Orchestra), and free-lance groups of New York musicians. However, best known are the twenty-two of these 29 Mercury albums that were with Fennell's own Eastman Wind Ensemble. One of these albums, Lincolnshire Posy

by Percy Grainger recorded in 1958, was selected by Stereo Review magazine as one of the 50 best recordings of the Centenary of the Phonograph 1877-1977. The two volume Civil War - Its Music and Its Sounds

, recorded in December 1960, was a notable set of recordings also made with the Eastman Wind Ensemble

, this time performing on original instruments. In 1961, Fennell received a citation and a medal from the Congressional Committee for the Centennial of the Civil War for these recordings. In 2003, the 1958 Mercury album Winds in Hi Fi