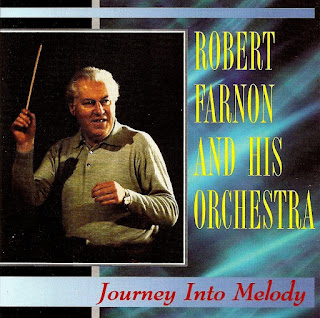 New additions to our current play list include a few standards selections arranged and conducted by Robert Farnon. Recorded by the BBC for broadcast on a series of programmes presented in the mid 1940's. Born in Toronto, Ontario, he was commissioned as a captain in the Canadian Army and became the conductor/arranger of the Canadian Band of the allied expeditionary force sent overseas during World War II, which was the Canadian equivalent of the American Band of the AEF led by Major Glenn Miller. At the end of the war, Farnon decided to make England his home, and he later moved to Guernsey in the Channel Islands with his wife and children.
He was considered by his peers the finest arranger in the world, and his talents influenced many composer-arrangers including Quincy Jones, all of whom acknowledge his contributions to their work. Conductor André Previn called him "the greatest writer for strings in the world."
Robert Farnon died at the age of eighty-seven at a hospice near his home of forty years in Guernsey April 23, 2005. He was survived by his wife Patricia and their five children. --- more of the Wikipedia Bio

Search Amazon.com for other albums recorded by ROBERT FARNON