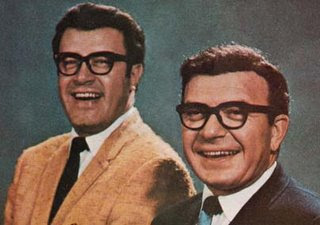 Ferrante & Teicher were a duo of American piano players, known for their light arrangements of familiar classical pieces, movie soundtracks, and show tunes.
Arthur Ferrante (September 7, 1921, New York City – September 19, 2009), and Louis Teicher (August 24, 1924, Wilkes-Barre,Pennsylvania – August 3, 2008) met while studying at the Juilliard School of Music in New York. Musical prodigies, they began performing as a piano duo while still in school. After graduating, they both joined the Juilliard faculty.
http://en.wikipedia.org/wiki/Ferrante_%26_Teicher
Louis Teicher died in 2008, three weeks before his 84th birthday. Arthur Ferrante died on September 19, 2009 at 88 (he had once said he wanted to live one year for each piano key). (Wikipdedia)
Search Amazon.com for FERRANTE AND TEICHER