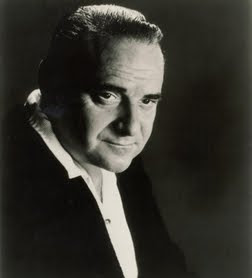 Felix Slatkin (December 22, 1915 – February 8, 1963) was an American violinist and conductor. His conducting career included his founding of the Concert Arts Orchestra and appearances with the Hollywood Bowl Symphony Orchestra. He was Frank Sinatra's concertmaster and conductor of choice during the Capitol years of the 1950s. He made over 25 recordings with these orchestras, also on the Capitol label, including a recording of Offenbach’s Gaîté Parisienne (a ballet arranged by Manuel Rosenthal), which won a Grammy Award in 1958. He also made over a dozen recordings for Liberty Records establishing “The Fantastic Strings, Fantastic Fiddles, Fantastic Percussion, and Fantastic Brass of Felix Slatkin.” In 1962, his recording entitled Hoedown won a Grammy nomination. Felix Slatkin died from a heart attack at the age of 47. More Wikipedia Bio
Email ThisBlogThis!Share to TwitterShare to FacebookShare to Pinterest
Newer Post Older Post Home