One Day In A Life by Bill Wren 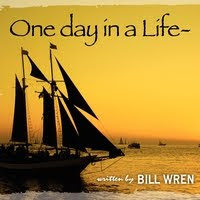 Bill Wren has just released his debut album, One Day in a Life. We are streaming several selections from the album on our radio station. The project was a perfect display of his fusion of genre. The success of the album began long before it was released as many of the songs charted at #1 or in the Top 10 on SoundClick.com and Broadjam.com. The success of One Day in a Life was due to a trio of talent behind the scenes. The first in this trio is Frank Ralls with his brilliant arrangements and production. Further arrangement was completed by the gifted musical prowess of Terry Winch and Ike Sturm. It's the professional work of these three pros that bring Wren's compositions to life with their flawless harmonic/rhythmic structure and polished production.