Just This Side of Spring 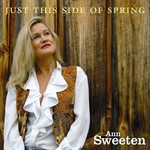 A new album by pianist Ann Sweeten is being featured on our music stream.

Stylish and sophisticated, Ann Sweeten has always presented a fine mix of new age music with her well-rooted classical themes. Simmering with Splendor. --Solo Piano Publications. PUBLIC BIO: Ann Sweeten displayed an early interest in the keyboard, and her mother gave her a Hammond organ when she was six. Three years later, she received a Baldwin piano for Christmas. She studied privately with David Sokolof, then attended Smith College, from which she graduated cum laude with a degree in foreign languages. Next, she took vocal lessons and founded a rock band called Fall Out. After two years, she returned to academia, attending the Boston Conservatory where she studied music, acting, singing, dance, and musical theater. She moved to New York, joined the actors union, and began getting parts in stage musicals, while also playing piano in clubs and restaurants. Starting in 1997, she began releasing new age piano albums on her own Orange Band record label.
Email ThisBlogThis!Share to TwitterShare to FacebookShare to Pinterest
Newer Post Older Post Home