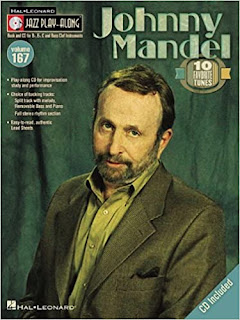 JOHNNY MANDEL...American composer and arranger of popular songs, film music and jazz. The musicians he worked with include Count Basie, Frank Sinatra, Peggy Lee, Anita O'Day, Barbra Streisand, Tony Bennett, Diane Schuur and Shirley Horn. Mandel composed, conducted and arranged the music for numerous movie sound tracks. His earliest credited contribution was to I Want to Live! in 1958, which was nominated for a Grammy. Mandel's other compositions include "Suicide Is Painless" (theme from the movie and TV series M*A*S*H), "Close Enough for Love", "Emily" and "A Time for Love" (nominated for an Academy Award). He wrote numerous film scores, including the score of The Sandpiper. The love theme for that film, "The Shadow of Your Smile", which he co-wrote with Paul Francis Webster, won the 1965 Academy Award for Best Original Song and the Grammy Award for Song of the Year in 1966. WIKIPEDIA  | RECORDINGS
Email ThisBlogThis!Share to TwitterShare to FacebookShare to Pinterest
Newer Post Older Post Home