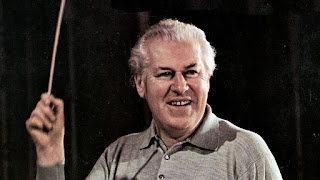 Robert Farnon was a Canadian-born composer, conductor, musical arranger and trumpet player. As well as being a composer of original works (often in the light music genre), he was commissioned by film and television producers for theme and incidental music. In later life he composed a number of more serious orchestral works, including three symphonies, and was recognised with four Ivor Novello awards and the Order of Canada.   AVAILABLE RECORDINGS
Email ThisBlogThis!Share to TwitterShare to FacebookShare to Pinterest
Newer Post Older Post Home