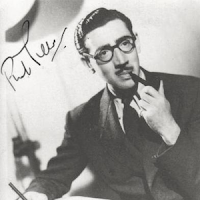 Philip Green was born in Whitechapel, London, England, UK and passed away on 6 October 1982, Donnybrook, Dublin, Ireland (cerebral metastases) He is known for his work on many film scores including Sergeant Cork (1963), The League of Gentlemen (1960) and Tiara Tahiti (1962). Although the composer always gave his original name as Harry Philip Green, he was in fact registered as just "Henry Green" at Whitechapel Register Office six weeks after his birth in 1911. His parents were Phillip Green (a boot clicker by profession, which meant he made the holes for the laces) and Elizabeth Green, née Vogel. Their son's middle name was added at a later date. The Philip and Dorothy Green Music Trust, founded by the composer and his wife, was established to help young musicians and composers. Projects included the Philip and Dorothy Green Making Music Award for Young Concert Artists, also the Philip and Dorothy Green Composer in Residence Scheme. Dorothy died in 1995. At the peak of his career in the 1950's, he composed as many as fourteen film scores per year. Began his recording career with EMI in 1933 and was for some time 'house arranger/conductor' at Decca. He later became resident musical director for the Rank Organisation. Played piano by the age of seven. Studied at the Trinity College of Music on a scholarship. Green became London's youngest West End conductor at the Prince of Wales Theatre.WIKIPEDIA  |  AVAILABLE RECORDINGS

VIDEO: Philip Green (1911-82) started his career as a dance band pianist and West End pit conductor, but later turned his attention to film music, and provided scores for some 150 movies - becoming for a time resident musical director for the Rank Organisation. Towards the end of his career he wrote for TV (eg, the theme for ITV's 'The Golden Shot') and also composed some religious music following his move to Ireland - commercial recordings of which are available. Green's name lives on in the Philip and Dorothy Green Music Trust, which supports young musicians. This published piano solo arrangement is from Green's music to the little-remembered 1952 movie '24 Hours of a Woman's Life', starring Merle Oberon and Richard Todd, and based on a novella by Stefan Zweig. I am grateful to Walter Schofield for kindly letting me have this and some other obscure light music piano scores from his collection.