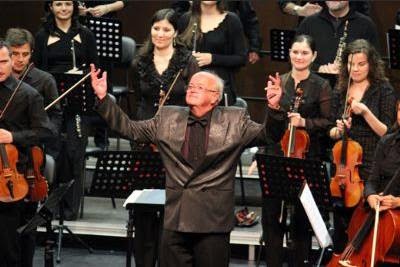 John Avery was born in Surrey, England. He studied music at London University and The Guildhall School of Music and Drama. His musical life has been varied and always busy. On leaving college, he went straight into London's West End Theatreland where he played the trombone in the musical "Canterbury Tales" for eighteen months. When the show went on tour, John Avery re-orchestrated it, and his is the version that is still used today. In his early twenties, he formed the Guildford Opera Company and was its conductor and musical director for some twenty years. During that time John Avery was responsible for the much acclaimed cycle of Verdi and Wagner operas. He was appointed as a staff conductor to a well-known broadcasting corporation in Britain for whom he conducted a weekly one hour live radio programme. He earned the affectionate nickname "the lightening conductor", not only because of his use of bright tempi, but also because he was always rushing from rehearsal halls to studios and to theatres. Apart from the principal concert venues in the U.K., he worked in Europe, especially France and Germany where he introduced a programme of English Music at the Beethovenhalle concert-hall, in the city of Bonn. At those times, it was not also unusual to see John Avery conducting a band at Wembley Stadium, for International football matches!
Email ThisBlogThis!Share to TwitterShare to FacebookShare to Pinterest
Newer Post Older Post Home