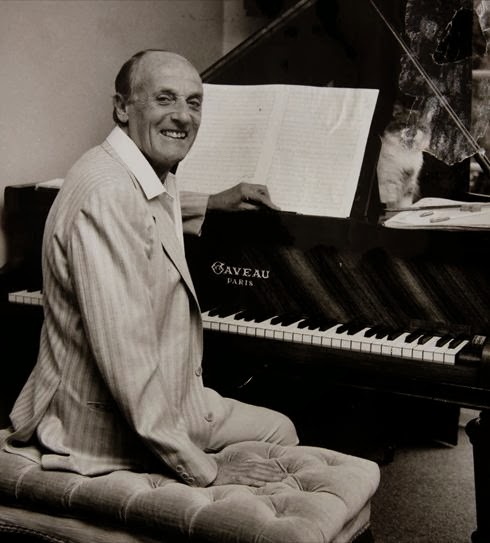 Up-to-the-minute report: Our beautiful music broadcasting buddy, Marlin Taylor reports: "Just spoke with John and he sounded quite “chipper” … which pleases me greatly, as he hasn’t sounded very upbeat is recent calls. However, he is failing physically, as is his memory and walking is rather difficult for him. He still has a dog, which I know is great company for him – for much of his life taking his dog for a walk was a special part of every day. John will be 90 on April 30th of this year … and it’ll be 10 years in August since wife Joy passed away. Correct me if I’m wrong, but I believe that John is the last remaining member of his peer group of great English conductor-arrangers. I was in contact with a representative of the estate of Ronnie Aldrich last week and can hardly believe it’s been 20 years since Ronnie died."
John Fox was born in Sutton Surrey and the year was 1924. He was educated at Sutton West School for boys, and from a very young age imitated all the musical instruments played by orchestras on the family’s small battery radio set. John’s parents thought he was mad, but in the end they realised he had a talent for music. As he was so keen, they soon sent him for piano lessons at a very early age for which he progressed rapidly, and began composing simple pieces for piano. At eighteen, during world war two, he was called up in the RAF With this musical experience and talent, the commanding officer in the R.A F base heard him playing the piano in the officers mess and commissioned him to entertain the airmen in the various messes for the rest of the war. MORE | MEMOIRS by John Fox
Email ThisBlogThis!Share to TwitterShare to FacebookShare to Pinterest
Newer Post Older Post Home