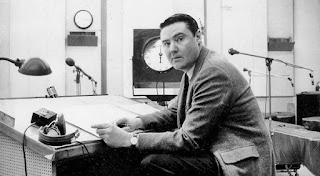 Thompson is considered a prime exponent of what has belatedly been termed "space age pop, or "space age bachelor pad music." This style of breezy, experimental orchestral music became popular in the 1950s and 1960s following the introduction of the long-playing microgroove record and the advent of high-fidelity and stereo home audio systems, which allowed enhanced sonic reproduction.  Thompson, was 88. He had Alzheimer's disease.


The writer and arranger provided the hi-fi soundtrack for a swinging-bachelor lifestyle.
ON THE ROCKS | OFFICIAL SITE

Thompson was one of the foremost composers and arrangers of what came to be known as "Space Age bachelor pad" music – tunes that allowed hi-fi buffs to turn the lights down low, mix the perfect martini and show off their tweeters and woofers. With cascading strings, upbeat rhythms and – as in his piece "Mmm Nice!" – breathy female singers, Thompson's music set a mood, but was more than mood music. In the late 1950s, he signed with RCA Victor to create such albums as "On the Rocks," with a cover featuring a bikini-clad model lolling in a giant cocktail glass.

Born Aug. 22, 1924 in San Jose, Robert Lamar Thompson grew up in rural Auburn, Calif., a town his parents thought healthier for a boy with asthma. He started learning piano at 10, teaching himself at a fairground on one he found under a tarp. Thompson studied music for a year at UC Berkeley but later said he learned more at KGO, a San Francisco radio station where he worked his way up from pageboy to arranger for the house orchestra. He tried composing during a brief stint in Paris but, looking for steadier work, he headed back to California and wound up playing at a piano bar in Los Angeles. He held a variety of odd musical jobs, accompanying Mae West on tour and writing the 1955 "Criswell Predicts," a swinging tribute to the busty vamp's favorite psychic. Thompson drew his inspiration from Maurice Ravel, Duke Ellington, and George Gershwin,