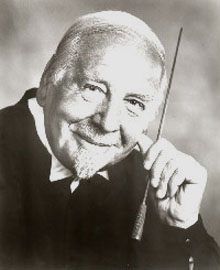 On January 27th in 1918, pianist/bandleader/symphony conductor Skitch Henderson was born Lyle Russell Cedric Henderson at Birmingham England. After World War II he was Bing Crosby's musical director on radio. He is best remembered as the bandleader on NBC-TV's Tonight Show with Steve Allen and briefly with Johnny Carson; he also was an occasional co-host subbing for Carson. Also in his later years as conductor of the New York Pops Symphony. He died Nov 1 2005 at age 87. His nickname ("Skitch") reportedly derived from his ability to quickly "re-sketch" a song in a different key.