JOE HARNELL Fly Me To The Moon 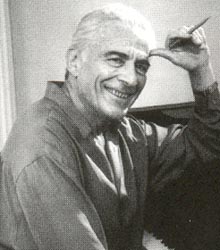 Joe Harnell (August 2, 1924, The Bronx, New York City - July 14, 2005, Sherman Oaks, California) was an American easy listening composer and arranger. He played in Lester Lanin's band at this time and found work as an accompanist for singers such as Judy Garland, Maurice Chevalier, and Marlene Dietrich. From 1958 to 1961, he was Peggy Lee's full-time accompanist and arranger for the albums Anything Goes:Cole Porter and Peggy Lee & the George Shearing Quartet. In 1962, he was hurt in a car crash, and while he recovered, Kapp Records asked him to work on writing potential hits in the then-hot genre of bossa nova. Harnell's biggest success was with his arrangement of Fly Me to the Moon, which was a hit in the US in 1963 (#14 Pop, #4 AC) and which won a Grammy Award for Best Pop Instrumental Performance. The song also peaked at #6 in Joe's hometown, on WMCA in New York, on January 16, 1963. The album from which it was taken went to #3 on the Billboard 200. Harnell would go on to release nearly 20 easy listening albums, on Kapp, Columbia, and Motown among others. Starting in 1964, Harnell worked with Gray Advertising as a jingle writer, and from 1967 to 1973, he worked as musical director of The Mike Douglas Show.