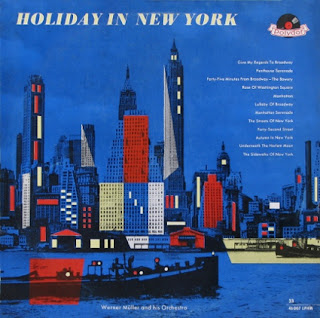 Search Amazon.com for Werner Muller and his orchestra

Click our label title for more about Werner Müller
German conductor Werner Müller was born 2 August 1920 in Berlin, He died 28 December 1998, in Cologne, Germany. Müller was conductor of two of the most popular radio orchestras in Germany. From 1948 to 1967, he led the Tanzorchester for the powerful station RIAS in Berlin. During this period he was associated with the pop singer Caterina Valente, whose recording of "Malaguena" was popular all over the world. In 1967 Müller became the chief conductor of the Tanzorchester of radio station WDRP in Cologne.
Email ThisBlogThis!Share to TwitterShare to FacebookShare to Pinterest
Newer Post Older Post Home