We have recently added selections from the "Lonesome Echo" recording to our streaming playlist. Jackie Gleason's #1 charting album from 1955, the one with that Salvador Dali artwork... 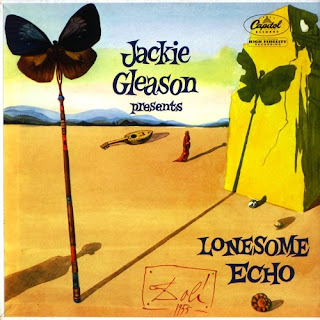 Loved as a comedian Gleason couldn't read music but he was an accomplished songwriter, arranger and conductor. In 1952, he made a deal with Capitol Records where he would cover any losses if his first album sold less than 60,000 copies, a seemingly unreachable goal in those days. Capitol never had to take Gleason up on his promise since more than 500,000 copies of Music for Lovers Only were sold. Gleason went on to release more than 20 albums between 1953 and 1969. He also wrote the theme songs for his TV Show The Honeymooners ("You're My Greatest Love") and The Jackie Gleason Show ("Melancholy Serenade"), and even scored the musical Gigot......more at Robinson Library