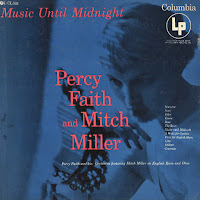 Recently we lost Mitch Miller, who had to be THE biggest influence of our lives in his position as the head of popular music at Columbia Records. Mitch played English horn and oboe solos during his "music business duties" on two Percy Faith albums (Music Until Midnight and It's So Peaceful In The Country) - two albums over all these years I never tire of, and learned to play most of these tunes myself "borrowing" from Percy's arrangements, having a great time trying to replicate Faith and Miller's phrasing, countermelodies and embellishments where I could back when I sold electronic organs and played "real" theater pipe organs when possible - and very often a tune from MUSIC UNTIL MIDNIGHT was in my repertoire!
Less than a year short of a century, we have lost Mitch Miller, and the best tribute I can think of is a song - an original entitled MANON written by Percy Faith, and played at a 1955 (could be 1954, not sure) "House Party" with Percy at the piano, and Mitch fired up the oboe with a squeak, for what is almost a bonus track for the MIDNIGHT album; sure, it was only a party, and no orchestra, "just" Percy at the piano, but the great Mitch Miller tones are there; it's kind of a chance to hear an extra track! Some of you might have this, but if not please enjoy, it's a 33 megabyte uncompressed .wav file, so I'd advise right-clicking and doing a "save as" on the file before attempting to play it unless your internet connection is fast and steady. It is presented, of course, in genuine MONO, just think, I was 3-4 years old and the world of recording actually managed with a single channel!
.wma "very compressed" version.